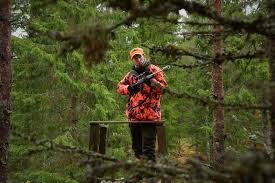 I’m covering scopes for a Ruger gunsight scout rifle, scope options and some considerations scout rifle with the forward mounted rail is made to accept something like this Leopold intermediate eye relief fix power scope, about two power kind of a fun scope. I’ll talk about that later or if you want to take off the rear sight which sights here Leopold excuse me Ruger included factory rings like they do with most of rifles to mount a scope.

I kind of like low power scopes because they’re basically, they do ninety percent of what you need for anything in the field, and I like because they’re small, well small turned out to be very important.

I want to show you see the clearance between the front objective and the rail that turn I was worried about that and that turned out to be pretty important. So typically classic hunting rifle scope is 3-9 power with a forty millimeter for objective. That’s not going to fit in the current configuration, there’s a couple easy options one would either pull this rail off and then the other option would be to return to Ruger.

These medium rings and get high rings so either one is good, I don’t really like either one of them so and I wanted a low-power scope. So this worked out for me . Just for your information take a set of calipers and you measure that front objective you’re looking at approximately 1.5 5 inches, so anything bigger anything larger in diameter is not going to fit without one of those two fixes either taking the rail off. Or getting different rings the forward I released scope is pretty cool, it’s part of the scout rifle concept, the scout rifle concept is a light carbine it has a hard-hitting round detachable box magazine and I really stoked, because there to be very quick very instinctual for shooting and they are very quick. I’m not sure if there are any faster than our traditional scope.

Once you’ve practiced with both, it is fun to shoot with one of these, it’s almost like having a pair of telescopic, iron sights. It’s kind of the best of both worlds, you’re really limited to a lower magnification probably point-blank range on this rifle is somewhere over 200 yards definitely, not 300 yards. So is if you’re gonna keep your shots close in, I don’t really think you need a whole lot of magnification for shots that far out, and really the problem with shots further than that with this rifle is that the ballistics on the bullets coming out. You are going to be dropping fast with any shot longer in about 250 yards so what you need is some way to hold over and the scope is really not geared towards accurate hold over.

Traditional scopes are fun like I said, I don’t think they’re any slower once you practice with them. Compared to the Scout scope maybe that’s subject to debate. I like them also because this is fixed power and the 2 power 2 – 1/2 power works fine, sometimes it’s nice to zoom in and i think really 2-7 scope gives you about 90% of what you need for hunting situations.

I go deer hunting and I’ve only ever really zoomed in beyond 7 power once, so I don’t think you’re handicapping yourself at all with the smaller scope and it’s lighter than some of the bigger scope.

So the rifle stays handy another benefit of a forward eye relief scope is that you have more access to the receiver area as compared to the traditional scope and then one of the concepts with the scout rifle is iron sights only and Ruger supplies front and rear sight.

If you were to gets a quick-detach rings for your Scout scope and the Scout scope were to fail, you could take the scouts go to scope off and still have iron sights. A lot of people like scout rifles like that to do a traditional scope, you do have to remove that rear sight to get the scope into place.

Anyway, if you’re going to mount a traditional sky, let’s dial scope to pay attention to the diameter, the front objective otherwise. You will run into problems, those problems are easily solved either by taking off the front rail . I haven’t done it but it looks like it’d be doable or returning rings to Leopold and getting high rings probably also not a problem. It just takes a little bit of time and then your other option is to get a forward eye relief scope and mount it into place which is another fine option. If you are looking for more option for your scout rifle, you may also like this scout scope buying guide from barrettrifles.com.